Here we are going to introduce the Bachi suited for a Nagadou Daiko(Miya Daiko) of middle size (1 to 1,6 shaku, equivalent to a diameter of 30,33cm to 48,48 cm)

When going to a taiko specialized store, you may face a big variety of bachi. Each team may have a different type which is the most suited for each style and performance.

There’s also a lot of types like Kaba, Take, etc but those 4 listed above are the main used for the Nagado Daiko, as it’s big, and a heavy material is necessary for making a big DON!! sound.

When hitting with the whole body and hitting the edge of the taiko it’s important that the bachi will bear it, so a harder one is preferable.

Considering that and thinking also about the durability, in our academy we are recommending the kashi bachi.

Its durability depends of a lot of factors, but in an average way, to beginners it may bears for about 1 to 3 years, and to advancers for about 2 to 6 months.

～Attention in the Usage～

The taiko bachi, specially the kashi bachi is really heavy and hard.

It can cuts more than a cutlery if it breaks.

And it may be a stronger weapon than iron.

It’s very important to be cautious in its usage.

Always listen well to the coach’s advice and not turn it to other people are a must.

We also recommend not using it in drums or hitting other surfaces like the wall or the ground.

We recommend using a bachi that is adequate for each age and gender.

We recommend the Bachi from Suwa Kougei as it has a good cost perfomance.

You grip it in a distance of about 2 fingers from the tip.

The correct manipulation is the first step to play the taiko.

In order to make a good sound without taking a toll on the body it’s important to apply the (1)law of the lever and the (2)law of the inertia while moving the bachi.

① The Law of the Lever ※Source① 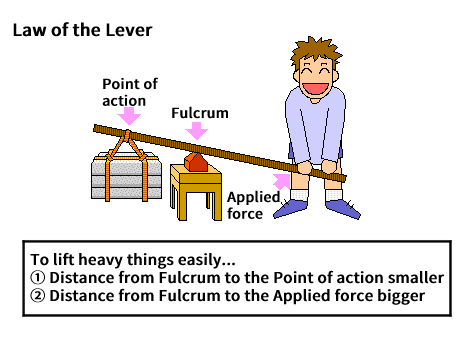 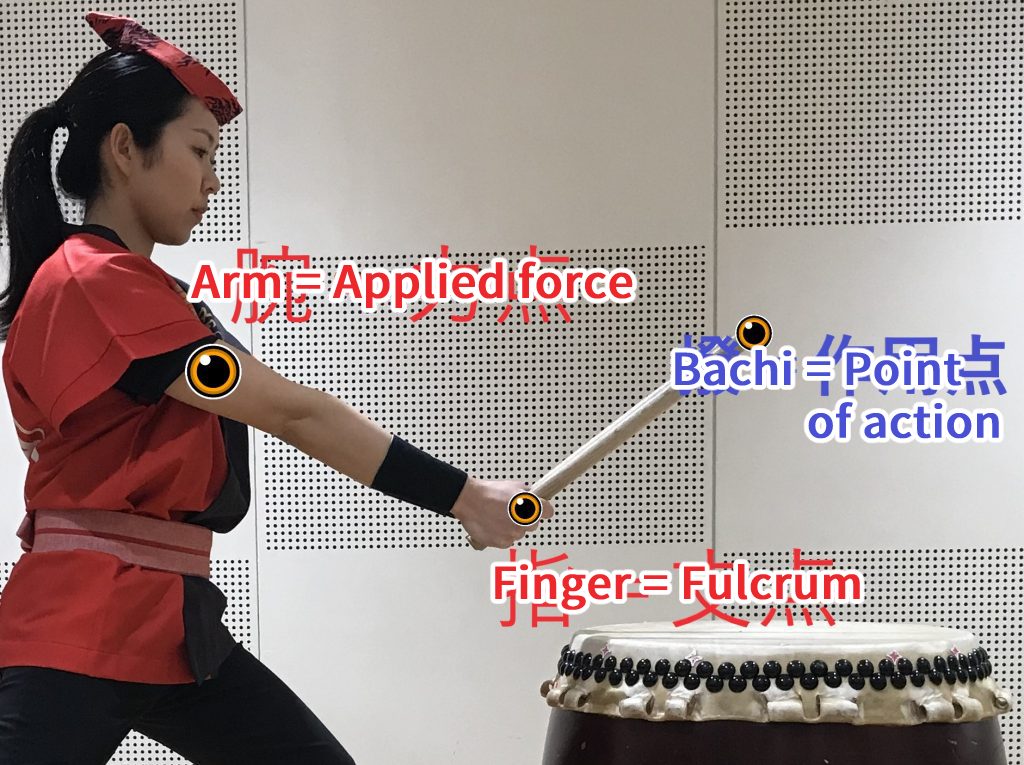 The point of action is the bachi itself.

The fulcrum is the point of contact of the palm and the bachi.

The applied force is bigger when going deeper in the arm joint, and can produces a bigger momentum even without so much power.

In our blog as we think of the importance of hitting with a big momentum with no much burden to the muscles, we judge essential to pay attention to the upper arm.

In the western drum there are techniques like wrist shot and finger shot, but for the wadaiko, as the kashi bachi is so heavy that kind of technique may result in pains on the fingers and consequently turns into a trigger finger.

The upper body is made of muscles so it may turn into a muscle pain, but our body is really nicely made so it will adapt to that and the necessary muscle will be developed.

The physical object has the property of keeping its motion state.

while the object in rest tends to keep in rest.

That property is called “Inertia”

The physical object will stand in the same motion state as it doesn’t have force influence from outside.

However, not having force influence from outside also includes not having an apparently force working in it.

In other words, that state won’t change also when the force from outside is balanced (the sum of force is equal to 0).

That’s what is called as “the Law of Inertia”.

When the train departures, the train itself advances forward, but the people’s body inside it fall down to the opposite side.

That’s basically because the leg that is contacting the train goes to the same direction, but the body is tending to keep in rest.

When the car suddenly stops in an accident, the body being thrown out from the car is also an example of the law of inertia, which can be stopped by a seat belt to prevent a serious injury.

If you replace that relation to the bachi, the arm, and the palm,

for making the inertia effect in the bachi,
you should not fix the bachi
and make a bending movement in the palm.

Being able to do that,
the bachi will go down when the arm goes up
and go up when the arms go down.

This is the bachi manipulation, the bachi’s flexibility.

That flexibility is made by the inertia and the momentum, which can be said also as a natural state, with no burden to the arm and no tightly gripping to fix the bachi more than necessary.

There’s the expression “like it was a part of the body” for the natural movement with no wasteful actions in it. In this case, the natural movement is made by not relying on the wrist and tip of the hand, but on the law of the lever, putting on the arm the least power as possible while not changing its inclination and making only the bachi bending by its momentum.

When hitting the taiko, if you use so much power gripping the bachi strongly, it will kill the bachi’s elasticity and make it decelerate, slightly dropping the work of the whole movement.

It’s important to grip the bachi as enfolding it, while making the bend movement in the palm, and using the inertia in order to make the biggest momentum with less force by the law of the lever.

That’ll make a smooth environment in the hitting process.

Also, the burden to the muscle and the wrist will be bigger, making also the friction bigger, which can cause blister and muscle pain.I believe most students have the experience of pen spinning at least once.

That is a little similar to the bachi movement, although the bachi should not roll.

The timbre produced by the bachi will also vanish.

It’s important to grip the bachi as enfolding it, while making the bend movement in the palm, and using the inertia in order to make the biggest momentum with less force by the law of the lever.

That’ll make a smooth environment in the hitting process.

I believe most students have the experience of pen spinning at least once.

That is a little similar to the bachi movement, although the bachi should not roll.

The bachi is heavy and it’s not very used in the routine, so it’s kinda difficult to make it bend correctly in the beginning, but after being able to make the law of inertia works, practicing that for about 30 seconds to 1 minute in the spare time like a stretch is a good exercise to getting used to it.

NO60~63 【Wadaiko Tateuchi】Upside down procedure